As we age, the color, texture, and tone of our skin changes.

These changes are due more to environment factors than aging. Smoking and sun damage cause wrinkles and give the skin a sallow appearance. To improve the skin surface, we perform an array of skin resurfacing treatments. The simplest treatment is a light chemical peel and the most advanced is fractional laser resurfacing.

Skin resurfacing is a general term for improving the appearance of the surface of the skin. In years past, chemical peels or dermabrasion have been the way to do do this. Now with improvements in technology, we can be much more precise in how we address these issues. For the most superficial sanding, we now use microdermabrasion. This addresses only the most superficial layer of the skin – more of a gentle buffing. For improvement in redness and brown spots we use BBL (broad band light/Intense pulse light), which also can reverse skin aging.

One step further is laser resurfacing. With this amazing technology, we can target precisely how deep we go. The superficial laser peels have no down time. The deep laser peels for wrinkle removal can also have up to a week of down time. The new Halo laser combines a superficial and a deep component so we can get more improvement with much less down time. The choice of resurfacing treatment will also depend on your goals and your willingness to have more down time. 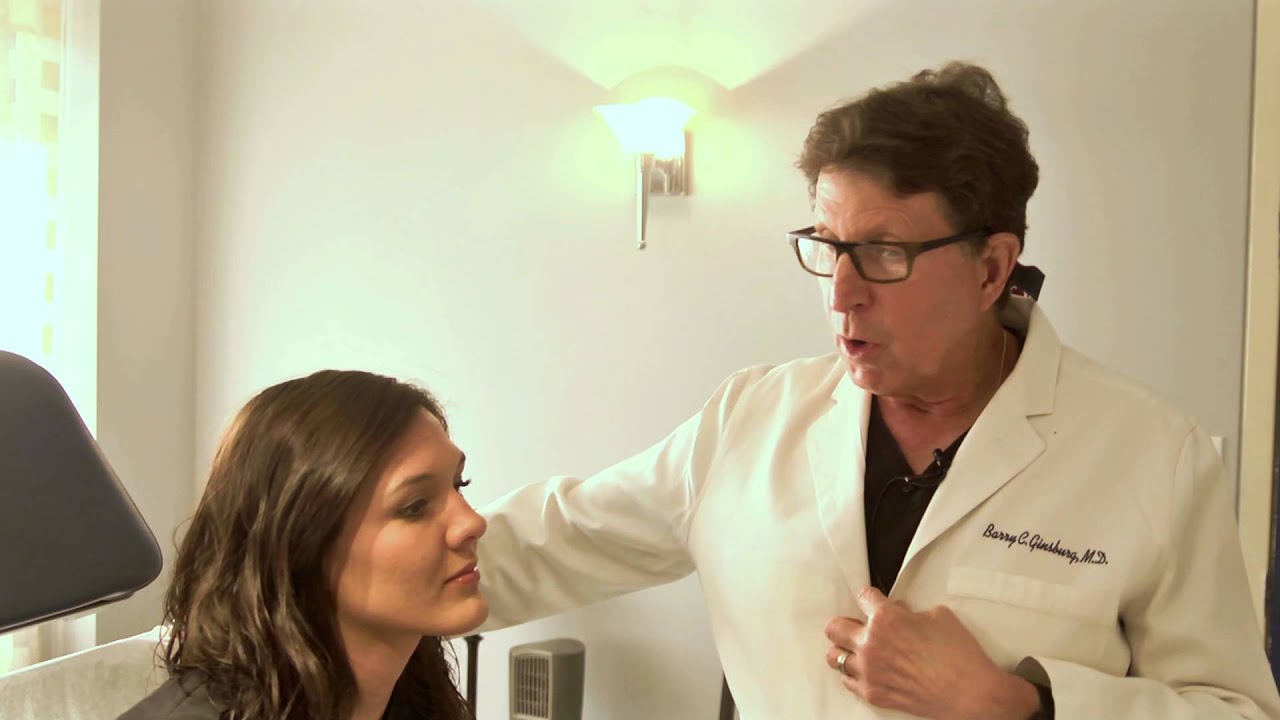 I’m Dr. Ginsburg and this is our second segment on the ways that we can make someone appear more attractive and youthful. In the first segment, we talked mainly about the shape of the face and, as you can see, Amber has a very pretty, youthful-shaped face as did Candace. But just to go over a few of the things we talked about, the shape of the temples, the beautiful shape of the cheekbones, the lip proportions, the sharp angle to the jaw, or the nice eyebrow, how it arches nicely and sits just above the orbital bone, one of the features that gives women their pretty, feminine appearance.

What I’m going to talk about in this segment is the skin surface and the first segment we talked about how we reshape the face and things we can do to eliminate lines caused by muscle movement, but what makes a youthful face look young is the color, texture, and tone of the skin. Amber is very young, she has a very smooth pretty complexion, there are no brown spots, there are no red spots, there’s no sun damage, but unfortunately, as we get older, due to aging or lifestyle habits, people develop freckles, they develop little spider veins, the skin will take on a little yellow, sallow discolor from repeated bending of the skin, particularly around the mouth. People will get what’s called smokers’ lines, which are not necessarily due to smoking, they’re due to repeated pursing of the lips. When we go like this, our lips contract and we get little lines above the lips. Over a period of time, those lines will remain at rest.

So, what I’m going to do today is talk about how to improve the surface texture, color, and tone of the skin. Of course, there are products that we use, you know, the main anti-aging product that everybody uses these days is retinoic acid, which comes in many different forms. Retin-A was the first brand, was used as an acne treatment, but we later discovered that it improved little brown spots and made the skin smooth looking. Beyond Retin-A, there are many treatments that we perform in order to make the skin look younger, and we can divide those treatments into two categories: Ablative, which means to burn and remove, and non-ablative, which produces no recovery and no change in the actual surface of the skin immediately after the treatments.

The laser that I use is called Sciton and Sciton is one of the most advanced lasers available. Sciton offers ablative and non-ablative treatments. The popular non-ablative treatment is called Photofacial BBL, stands for broadband light, and the new term for repeat treatments is called Forever Young. The technology involves delivering energy through the skin. We do not burn the top layers of the skin, but the energy goes through the top layers of the skin, targets brown and targets red. So, if someone comes in and they have, you know, freckling or sun damage causing the skin to turn brown, we advise them to get a series of BBL treatments, a series of photofacials on repeat treatments. You will see improvement in the spider veins, which some people call rosacea, you will see lightning of brown spots and you will also see collagen, new collagen deposition which gives the skin a smoother look and helps with fine lines.

The series is called Forever Young because it was discovered that people who came back on a regular basis for the BBL treatments not only continued to look young, but when they did skin samplings and biopsies, the skin retained the characteristics of younger skin. So if I started treatments on her, let’s say when she reaches 30 or 40, and I did treatments every year, 10 years later I could look at the surface of her skin and it would look as young as it did before, if not younger, and we can do a biopsy and would look just as good as youthful skin.

So the main treatment I do for people who don’t want any downtime but want improvement in redness and color, texture, tone is the Sciton BBL treatments. Someone who has more advanced changes but is willing to have a little bit of downtime, then we use the ablative technology. Ablative means to remove or, you know, in layman’s terms, it means to burn the surface of the skin. The beauty of the Sciton laser is that we can tone the depth of the burn to within one ten thousandth of an inch, so if someone wants to come in and just wants a teeny little bit of brightening treatment, they will get a 4-micron peel, there’ll be a little bit red that day, the next day they put their makeup on and they go to work. Their skin will look brighter, it removes a little bit of the brown, and if they do a series of those treatments, you get more and more improvement. That’s about the lightest treatment you can do, is a 4-micron micro laser peel.

We can tune the Sciton laser to go deeper. We can go as deep as several hundred microns for someone who has deep wrinkling. In order to get a positive effect on the wrinkling, generally we have to go between fifteen hundred microns, and that generally has a two to three-day recovery time. So, if you’re coming to me and you say, “You know, what can you do to make my skin look younger?” I’ll recommend either ablative or non-ablative treatments and your choice will depend on how much downtime you can afford. If someone is in their 50s and 60s and want significant improvement, I might recommend a two to three hundred micron peel, but they would have to be willing to take three to five or even seven days off from work. Deep wrinkles around the mouth are one of the hardest things to treat, in order to go deep enough for that, generally we need a five to seven-day recovery. The results can be dramatic, it can absolutely make an older wrinkled face more youthful and attractive.

So in summary, what we’ve talked about is the ways to improve the surface of the skin by using various products and non-ablative and ablative resurfacing. So, that would, you know, if someone came in for consult, we would have to take into consideration what their aesthetic goals were and whether or not they are going to have downtime. I’m Dr. Barry Ginsburg, and I hope you enjoyed this discussion on skin resurfacing.

The skin resurfacing treatments we offer, listed from lightest to heaviest, include: